After 24 months of work, H2020 project „PRoPART”, funded by the European Global Navigation Satellite System Agency (GSA), was successfully closed. The 7 consortium partners, coming from 4 European countries have developed an RTK (Real Time Kinematic) software solution by both exploiting the distinguished features of Galileo signals as well as combining it with other positioning and sensor technologies. RTK gives the possibility of cm-level accuracy using correction data from reference stations. The innovation developed during the project can be a game changer for the future mass market of autonomous transport.

Sandhult, 21 November, 2019. – Enhanced safety and efficiency – these are the most important benefits expected from autonomous vehicles and advanced driver assistance systems. For these to operate in a highly reliable way, a robust and precise positioning solution is required. Delivering such a solution has been the main purpose of the PRoPART project.  Through exploitation of the distinguished features of Galileo in combination with other positioning and sensor technologies, shared using V2X technology, this goal was achieved.   The project culminated in a successful demonstration last week at AstaZero Proving Ground in Sandhult, near Borås, Sweden.

The solution, developed during the project, was demonstrated in a recreated highway situation, with a connected autonomous truck in the presence of two unconnected human-driving cars. The truck wishes to make a safe and efficient lane change.  The decision to change lane or refrain from changing lane was made by the PRoPART system, relying on combined, centimetre accurate positioning data and collaborative perception sensor data fusion. In this scenario the lane change manoeuvre was executed by a self-driving truck from Scania, entirely relying on the PRoPART solution for situational awareness.

The importance of the PRoPART project lies in delivering a robust solution for the future mass market of autonomous road transport, that fulfils the different needs of vehicle OEMs. It uses object detection sensors as well as position and time information from both the autonomous vehicle as well as similar information from road side detection units by means of V2X communication, providing remote sensing of non-connected vehicles, offering a reliable solution for the transition period when both automated and non-automated vehicles are using the roads.

The project combined RTK Positioning Software from Waysure (Sweden) with satellite measurements, in particular advanced Galileo signals for improved accuracy and authentication from Fraunhofer IIS (Germany). The satellite positioning has been augmented with an Ultra-Wideband (UWB) ranging solution from Spanish research institution Ceit-IK4. The self-driving truck was supplied by Scania, with Hungary-based V2X company Commsignia providing in the C-ITS technology. Baselabs from Germany provided sensor data fusion of onboard and road-side sensors and developed a situational assessment for the intended automated lane change manoeuvre. The project was coordinated by the Research Institute of Sweden (RISE). 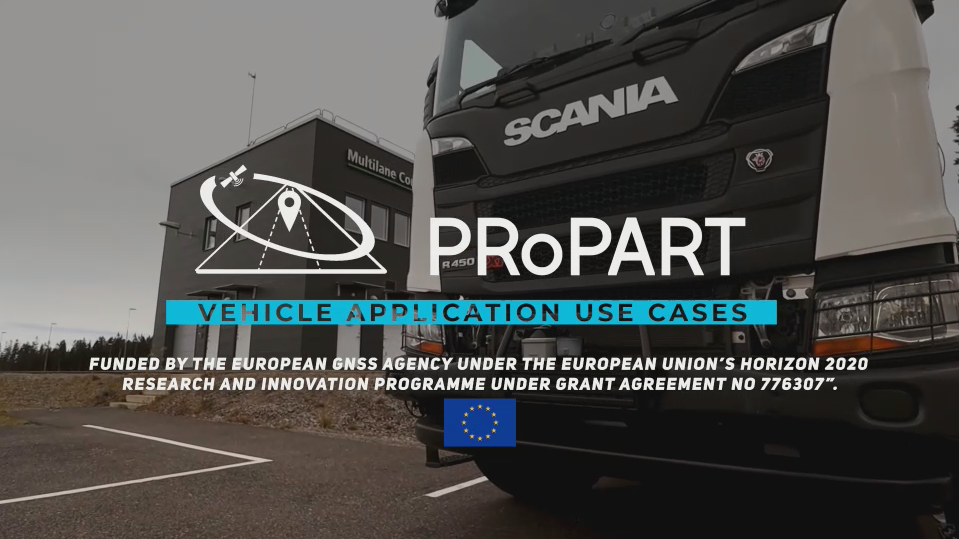